The railroad serving this train station was originally called the Orange and Alexandria Railroad (O&A). By 1860 it extended from Alexandria to Lynchburg. It was built primarily to get farm products to Alexandria and Washington and to transport supplies from these cities to farms.

The Fairfax Station served the county seat of Fairfax, then known as Fairfax Court House. Many families in the area donated some of their property for the railroad right-of-way.

The original Fairfax Station was built in 1852. Irish immigrants moved into the area, supplementing the large slave labor crews who built other parts of the line. Many of the new workers settled in the area around Fairfax Station. The influx of Catholics led to the construction of St. Mary of Sorrows Church, built on land that had been donated by the Hamill and Cunningham families. The cornerstone was laid on September 19, 1858. The church was dedicated on September 23, 1860.

The museum participates in the Civil War Trails and Clara Barton Junior Ranger programs to help preserve the history of these important events.

The railroad and station became strategically significant for the movement of troops and supplies during the American Civil War. The O&A was the most direct route between Alexandria to Richmond. Consequently, many battles during the first 3 ½ years of the war were fought over and along this railroad, with the train station playing a supporting role. In August-September 1862, the Station was the evacuation point for wounded Federal soldiers during the Battles of Second Manassas and Chantilly. Clara Barton was among the civilian volunteers aiding the wounded.

New stations were built as prosperity returned to the area. In 1894, the line became part of the mighty Southern Railway. The rail line was double-tracked in 1903, resulting in moving the station to its final location.

Fairfax Station’s name was changed to “Swetnam” postal village on August 21, 1897, reflecting the prominence of one of its leading citizens. It briefly was known as Faircroft from 1918 until the village was permanently designated Fairfax Station in 1921.

Interested in volunteering with us? Please explore our volunteer opportunities. 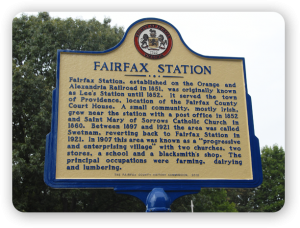